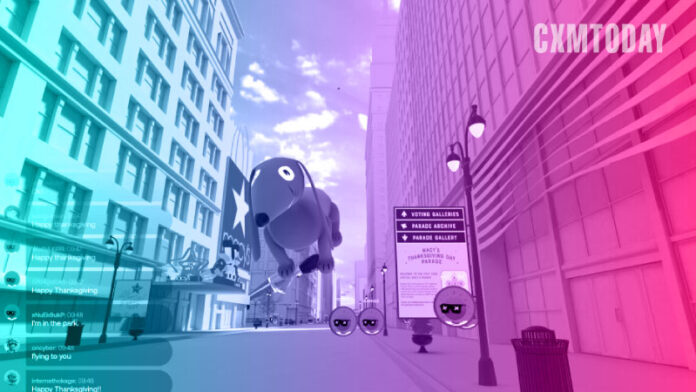 The Macy’s Thanksgiving Day Parade, now in its 96th year, is known by many as a staple of the holiday season. NBC’s coverage of the 2021 parade raked in 25.4 million viewers and a 6.4 rating in the age 18 to 49 demographic.

Using the metaverse as a connection between the retailer and such a large span of consumers may help the company as it looks to recover from a difficult season. According to Q3 financial results, net sales were $5.9 billion, down 3.9% from the year before but up 1.1% from 2019.

Macy’s metaverse and Web3 tie-up for the parade is powered by OnCyber in partnership with Media.Monks and Transparent House and can be accessed starting Thanksgiving Day. The virtual parade will feature balloons spanning Macy’s nine-decade run of the real-life event. Within the virtual experience, users can access NFT gallery collections from five creators: Boss Beauties, Cool Cats, gmoney, SupDucks and VeeFriends. Starting Nov. 24 and lasting through Dec. 4, users can vote on their favorite project for the winner’s design to become the retailer’s 97th balloon. The first 100,000 people who vote will receive a free Macy’s digital collectible.

Additionally, users can mint a virtual gallery pass for $50 to gain access to an OnCyber NFT gallery space that will be airdropped Dec. 5. All proceeds from the minting opportunity will be donated to Big Brothers Big Sisters of America.

“Our genesis collection of Parade NFT’s last year was so successful that we wanted to allow our digital community to select a native NFT design to be transformed into a real-world Macy’s Parade balloon, while also creating an opportunity to raise critical funds for our partner Big Brothers Big Sisters of America,” said Will Coss, executive producer of Macy’s Thanksgiving Day Parade in a press release.

Macy’s has continued exploring the Web3 and metaverse space beyond its annual Thanksgiving festivities. For the retailer’s Fourth of July celebration this year, it released 10,000 free Macy’s Fireworks NFTs in three tiers, each showcasing elements from the annual fireworks bonanza and yielding the ability to unlock access to an augmented reality wearable to be used on select social media and video platforms.